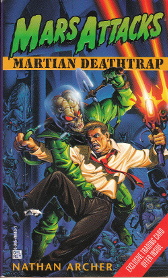 Martians on the March!

Guides and a party of tourists are holed up in an eccentric millionaire's bizarre, mazelike mansion when a Martian death squad arrives to make sure the area is clear of humans.

Carnage ensues as the tourists arm themselves with what they can find in the mansion's displays -- halberds, chainsaws, antique cars, and so on -- to defend against death rays and giant insects!

The Story Behind the Story

When I was eight years old I stopped in at Blake's News one day after school, planning to buy some penny candy. I saw they had gum cards, too, and a series called "Mars Attacks!" caught my eye. I bought a pack.

When I got them home and unwrapped them, I was astonished -- I'm not sure what I had expected, but I sure hadn't expected anything like "Prize Captive" or "Destroying A Dog." I don't remember for sure which others were in the pack -- I think "The Skyscraper Tumbles" was one -- but those two made an impression.

They also scared me a little, not in themselves, but because I knew that if my parents saw them I'd get a lecture. So I didn't buy any more; I bought wholesome stuff like Astronaut cards thereafter.

But I remembered them, and when the comic books came out in 1994 I bought and read those and loved them. When I heard that Tim Burton was making a movie, I was thrilled.

And then I got a phone call from an editor at Del Rey asking whether I knew anyone who'd be interested in writing a "Mars Attacks!" novel. I said yes -- I would. (I may have made a couple of other suggestions, as well; I don't recall exactly.)

There were some complications. Del Rey did not have any rights to movie tie-ins, but they had bought the right to do spin-offs from the comic books and gum cards, and wanted the first one out in time for the movie's premiere, which meant that the novel had to be written in six weeks. It would also need to be reasonably consistent with the comic book continuity, and would need to clear the Topps editorial office.

I didn't think those were insurmountable obstacles, and we had a deal.

With so short a deadline, and a premise so over the top, I asked some friends and my kids what they wanted to see in the story. My son wanted a polar bear, my daughter wanted to see a Bugatti destroyed, and a friend wanted to see flying saucers strafing a motorcycle gang, so I threw all those in. For my setting -- well, I'd recently visited the Winchester Mystery House in California, so I invented a similarly demented mansion on the coast of southern Texas and had a random collection of people taking shelter from the Martian invasion there. And yes, I had a floor plan, since lost; I didn't just make it up as I went.

The guys at Topps overseeing continuity were pretty easy-going; the only hitch was when I wanted to include giant lobsters. Giant bugs have always been part of the story, and I figured lobsters were just big aquatic bugs, but I was told no, I could only use insects. So I had to substitute giant sand fleas, which I thought were less fun. I did throw in a moth and a Japanese beetle, as well. 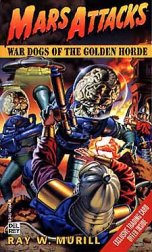 I was pretty pleased with the results, to be honest, and the various editors were, too. Harlan Ellison's comment, though, was, "You really phoned that one in, didn't you?"

I'd hoped to write more, actually. Del Rey had an option to continue the series, and I was thinking about one with a submarine crew battling Martians -- coming from a dry planet, I thought the Martians might have a problem with the very concept of a submarine. But the movie flopped, and the two novels, mine and Ray Murill's War Dogs of the Golden Horde, didn't do especially well, so the series was dropped.

But I sure had fun writing Martian Deathtrap.

This novel has been translated into Spanish and Hebrew.