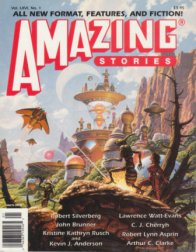 Okay, there are two separate things I want to discuss about this story. First, where it came from: The question of whether human souls really exist.

What, I wondered, if some people have souls that can survive after death, and other people don't? Suppose it's a mutation that's arisen in some population...

So that was the basic idea that became "The Ghost Taker." I wrote it, Amazing bought it, it got a nice illustration where a friend of ours was the artist's model, and it was all good.

But then there's the second thing.

From 1987 through 1999, I was very active on the old GEnie network. That was my primary online hang-out, and where I did most of my communicating with other writers.

At one point around 1990 there was a discussion on GEnie about "mimetic fandom," i.e., devoted fans who act out aspects of their favorite works of fiction. The obvious manifestation of this is cosplay (a word that didn't exist yet at the time), but it can go well beyond that.

While most mimetic fandom is based on movies and TV, there's some based on written fiction, as well: Darkover fans, Pern fans, etc.

A bunch of us got talking about what you need to have for mimetic fandom to arise. The story needs to have a community separate from the mainstream culture -- Darkover as distinct from the Terran Empire, the weyrs as distinct from the rest of Pern, etc. The community needs to have something that makes its people special -- laran or dragons -- and to have a variety of clearly-defined social roles. The community must be misunderstood by outsiders. And so on. Distinctive attire and convenient props (e.g., "fire lizards") also help.

I could see why Ethshar or the Lords of Dus hadn't attracted mimetic fandoms -- they didn't have these prerequisites. But I realized when I wrote "The Ghost Taker" that it did, or at least could -- the ghost takers could create their own communities that struggle to preserve the souls of the dead despite most of the population dismissing them as superstitious fools.

I started to work out how to expand "The Ghost Taker" into a novel, first in a series. I turned a slightly-revised version into Chapter One of the novel, wrote Chapter Two...

And that was when I realized I didn't want to create a mimetic fandom, with carved staves and so on. It would be interesting to see if I could, but then I'd have obsessed fans wanting to be part of my creation, and that didn't really sound like fun. So I stopped. There's only the one story, and it's only available as a 99-cent e-book

But I wonder sometimes whether it would have worked.