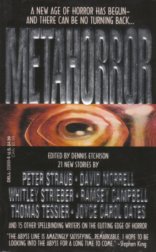 It's a funny thing -- I usually have to plan out my SF and fantasy stories, but some of my horror stories just happen. This was one of those. The second line came to me while I was driving, on the way to visit my brother-in-law in Durham -- it was originally the first line, but later I added another sentence before it. It just grew from there, and when we got to my brother-in-law's house I immediately asked if I could borrow his computer. While my wife and kids said hello and made polite conversation, I wrote up "Stab." I'd worked it all out on the road.

This was shortly after my mother's death from cancer, and it feels as if there's a connection between her death and the story, but I don't know what it is.

Anyway, I wrote it in a single sitting at my brother-in-law's place, and when we got home again I printed it out and sent it off to an anthology that I knew was open, and they bought it. That's all there was to it.

It's short, but effective; I used it sometimes back when I still did readings, and audiences were generally very positive.

On a whim, I made it available as an e-book

. The anthology where it was originally published was Dennis Etchison's Metahorror

. And when I finally put together a collection of my short horror, Hazmat & Other Toxic Stories, naturally I included it there.

Incidentally, I later wrote a companion piece, "Slash," that first appeared in Hazmat & Other Toxic Stories.