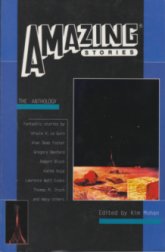 Back when we lived in Lexington, Kentucky (May 1977-December 1983) I found myself intrigued, for no obvious reason, with the parking lot of a Holiday Inn on New Circle Road NE. It seemed badly designed, larger than it needed to be and with too much of a slope to it, and it was usually mostly empty. For some reason I decided that it was a good place for a portal into other realities, and came up with the premise of a series of stories to be called "The Hole Above the Parking Lot," in which just such a portal mysteriously appears above the part of that parking lot that no one ever seemed to use.

The idea was that the hole was a many-dimensional sphere existing in an infinite number of realities at once, so that people could simply walk through -- though navigation would be a challenge. How different realities reacted to this manifestation varied.

The ideas beyond the premise did not come thick and fast, though. I wrote the first story in the series in 1987: "An Infinity of Karen.".

And the second, "Revised Edition," got written in 1994 when the editor who'd bought "An Infinity of Karen" asked me to contribute something for Amazing Stories: The Anthology

There is no third story, as yet. I had originally planned to write enough to put together an entire collection of them; it never happened.

As for the specific origins of "Revised Edition," there have been stories about libraries of books that never got written, from Borges to Bradbury to Gaiman, and critics have often fantasized about various "what if" scenarios for both books and movies, and it occurred to me that that would be something you could trade between parallel worlds. After that, the story pretty much wrote itself.

I wrote "Revised Edition" for the anthology, and included it in Celestial Debris, but we're still a very long way from The Hole Above the Parking Lot, the collection I originally envisioned.