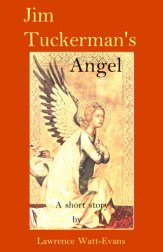 This was one of those stories, like "Stab" or "The Note Beside the Body," where the opening just popped into my head and wouldn't go away.

With those others, though, the rest of the story went ahead and wrote itself very quickly. "Jim Tuckerman's Angel" wasn't so cooperative. The first few paragraphs were easy, but then it stalled for awhile. It was obviously meant to be a speculation about angels, but I didn't know just where I wanted to go with that.

Meanwhile, elsewhere in my life, several people, myself among them, under the direction of William Sanders, had created a quarterly webzine called Helix. I wound up as managing editor, which mostly meant I handled the contracts, but I also consulted on lots of other stuff. And all staff members who were professional writers -- which was about half of us -- were expected to contribute a story or two.

Except I was busy with other stuff -- like being managing editor, and making a living writing novels -- and hadn't been writing many short stories lately. Especially since Helix's remit was to publish good stories that wouldn't be published elsewhere because they didn't fit within genre boundaries, or dealt with sex or religion or politics in "inappropriate" ways.

But then it occurred to me that maybe "Jim Tuckerman's Angel" would fit, if I could just finish it.

Helix lasted about two and a half years, and then we shut it down; I won't go into the reasons here except to say it wasn't fun anymore, nor was it bringing in enough money to justify the hassles. We knew well in advance that our tenth issue would be our last -- and if I was going to hold up my end and contribute a story, it needed to be done in time to go in that issue.

(Actually, at one point we'd intended to shut down after Number Eight, but we extended it. I'm not sure I could have had anything in time for No. 8.)

With the magazine's end looming I sat down and pushed myself to finish "Jim Tuckerman's Angel," and got it in a little before the deadline. William liked it, it ran in the tenth issue, and that was that.

If I hadn't had that deadline, I don't know if I'd ever have finished it.

The appearance in Helix meant I couldn't sell it anywhere else except as a reprint, and I didn't see any appropriate reprint markets, but I thought it was a good story that deserved to be seen, so after awhile I put it up on Misenchanted Tales, and you can still read it there.

Misenchanted Tales never drew much of an audience, so I also put it out as a 99-cent ebook.

Later, I included it in my collection, Hazmat & Other Toxic Stories.

And that's about all there is to it.