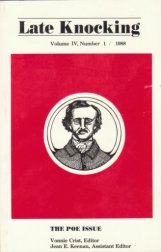 Many years ago, Julie and I were driving Interstate 80 across northern Pennsylvania, east to west -- I forget whether we were coming from New York or New England, but we were en route to Kentucky, where we lived at the time.

It was mating season for white-tailed deer, of which Pennsylvania has a plethora. When they're looking for sex, deer are not looking for cars, and therefore we saw a lot of dead deer along the highway. I mean, we counted at least sixteen before we decided to stop.

And the reason we stopped counting was that sometimes we weren't sure of how many we were looking at. A semi traveling at 70 MPH does a lot of damage. In a couple of cases we argued about whether a particular array of body parts represented one deer or two.

In the course of one such argument, I contended that the fragments were too far apart to come from the same animal, because the impact wouldn't have spread them so far, and they sure didn't move themselves, since dead things don't move. 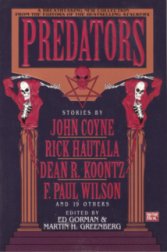 Then I needed a story to go with it, and I had been reading about the human instinct to stay away from corpses -- only good sense, since whatever killed one person might kill you, and it appears to be genetically hardwired into us. We had also recently visited friends in an old house in the Kentucky hills, where a decrepit little house in the middle of nowhere was largely furnished with stuff that had been in the family for over a century. And I'd been thinking about how people ignore kids.

And there it was.

I wrote the story without a specific market in mind, but Vonnie Crist turned up, practically begging me for a story for her small press mag Late Knocking, so I sold it to her.

The magazine's circulation was low enough that Marty Greenberg didn't consider it a problem when he bought the story for Predators five years later.

But after that, there was no further interest for a long time. Eventually I gave up and published it as a stand-alone ebook,

and it's still available in that form. It's also included in my collection, Hazmat & Other Toxic Stories.