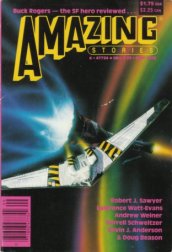 I've been fascinated by the infinite-worlds hypothesis for a long, long time, as anyone who's read Crosstime Traffic, my first short story collection, can see. I used to spend a fair bit of time mulling over variations on the idea, resulting in "The Drifter" and "Why I Left Harry's All-Night Hamburgers."

I also came up, at some point, with the idea of the hole above the parking lot, an opening connecting an infinite number of alternate realities.

Honestly, I don't know exactly when I came up with it, but it must have been when we lived in Lexington, Kentucky (May 1977-December 1983), because right from the start, I located the Hole in the southeast corner of the front parking lot of the Holiday Inn on Rte. 4/New Circle Road NE in Lexington. I mean, the idea of writing stories with such a phenomenon somewhere else simply never occurred to me -- that's where it was, as far as I was concerned.

While it doesn't come into the stories, I had an entire background worked out for the Hole, and knew lots of technical details about its nature, its dimensions, and how to navigate it. Since the characters in the stories don't know any of that, though, neither do my readers.

I hoped to eventually write a whole bunch of stories based on the notion of the Hole, to be collected in a book called (what else?) The Hole Above the Parking Lot. So far, though, I've only written two.

"An Infinity of Karen" was the first. ("Revised Edition" is the other one.)

The original title, by the way, was "Eurydice," but my agent (who handled short fiction back then) thought that was too esoteric, that not enough readers would get the reference, so I changed it. The story's antecedents include a Jack Finney story, title forgotten, as well as Orpheus and Eurydice.

This story was my first sale to Amazing, but by no means my last.

The list below may not be complete; I have a vague memory of another reprint, but I don't seem to have any records, so I may be imagining it. And of course, it's still right here, on my website.