Below is the answer to a question left unanswered at the end of the story, and you really don't want to know until after you've read the story.

(It's trivial, anyway, just a very minor detail. You'll be disappointed. I hadn't intended to ever answer it, but people kept asking me, so eventually I decided I might as well tell them what they wanted to know.)

So if you must know, then scroll on past the picture and there it is... 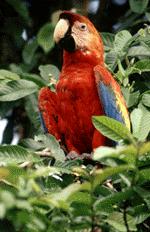 The parrot used to belong to a brothel, and will, on cue, say, "Come on boys! This way!" Captain Dancy was going to send it in a nearby window, then cue it to talk, so as to lure away the kitchen staff in the Governor's Palace. This would mean that the secret of the entrance through the wine-cellars wouldn't be given away.

So now you know.