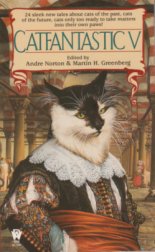 I like cats. We've always had cats. When I was growing up my family had anywhere from one to fourteen cats at any given time. Since I went out on my own it's only been one or two at a time, but still, we keep cats. I love the furry little psychopaths.

So when I got an invitation to submit a story to the fifth volume in Andre Norton's CatFantastic series, I jumped at it.

Only catch was, I didn't actually have a cat story on hand, and the deadline was close. So I came up with one as fast as I could, which did not leave much time for cleverness or depth. I couldn't think of a good title in time, so I just named it after the lead character.

Trixie's mistress is loosely based on the lovely woman who lived next door to us in Lexington, Kentucky from May 1978 to December 1983. (We moved, she didn't; she'd been there for decades.) The house is her house. Trixie herself isn't any particular cat. 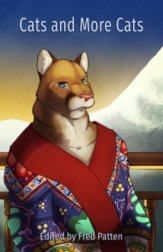 Anyway, I wrote it quickly and sent it off, and was pleasantly surprised when Ms. Norton accepted it. I was somewhat puzzled, though, by the accompanying note, in which she said it wasn't the usual sort of story for the series but she would take it anyway.

I'd thought it was exactly the usual sort of cat fantasy story, and was disappointed that I hadn't been able to come up with something more original. Guess I'm not a good judge of my own work.

It's recently been reprinted in a small-press anthology, Cats and More Cats, from FurPlanet Productions. The original CatFantastic anthology is out of print, but it's not hard to find used copies, if you want to read the story for yourself and decide whether you agree with me, or with Andre Norton.