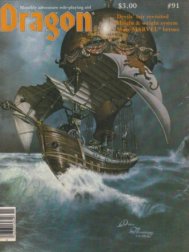 When I lived in Lexington, Kentucky, a gaming shop opened downtown. It was called the Rusty Scabbard, and it's apparently still there and doing well. We used to go there occasionally, and some of our friends hung out there more than occasionally.

On one occasion when it was still quite new, though, my wife couldn't remember the name of the store except that it started with R and had a fantasy motif; she called it "the Rune & the Dragon."

Which I thought was a really great story title, so I wrote "The Rune and the Dragon."

At that point I was not yet much of a short story writer; in fact, I'd only sold three (out of about thirty attempts at writing them), all to minor markets, and all years earlier. I figured it couldn't hurt to try, though, so I sent the story out, and was pleasantly surprised when it sold to The Dragon. They published it in their November 1984 issue -- but got the byline wrong on the contents page; it just says "Lawrence Evans." At least I know they didn't buy it for name value.

That was my only short story sale between 1980 and 1987. It has no connection whatsoever with anything else I ever wrote. It's just there.

I did include it in my collection Crosstime Traffic