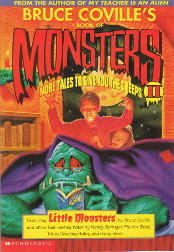 [If the following seems familiar, that may be because much of it is cut-and-pasted from "George Pinkerton and the Bedtime Ghost." There's new, specific material eventually, further down.]

That was George Pinkerton, the small-town librarian from Springfield, Indiana who stumbled into a career as a monster expert.

"George Pinkerton and the Bloodsucking Fiend of Brokentree Swamp" was the first I actually wrote in the series, though it was at least the third I told my kids. I don't remember what inspired it, unfortunately, but after I added Billy as the narrator Bruce Coville bought it for Bruce Coville's Book of Monsters II

Someday I hope to assemble an entire volume of Pinkerton stories, but it hasn't happened yet, so "George Pinkerton and the Bloodsucking Fiend of Brokentree Swamp" has never been reprinted on paper, but I did put it on the web for International Pixel-Stained Technopeasant Day in 2007.

Read "George Pinkerton and the Bloodsucking Fiend of Brokentree Swamp" on the web!