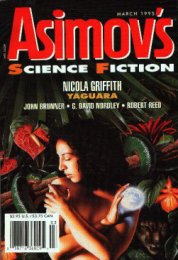 One night I was chatting with some friends, and one of them made a joke about Harlan Ellison's classic story, "I Have No Mouth and I Must Scream," referring to it as "I Have No Mush and I Must Cream." Someone else said no one could write a story to fit that title. I said I could.

So I started thinking about the implications of that ridiculous title. An ordinary American would say, "I don't have any mush," not "I have no mush," and together with the compulsion of "I must cream" that suggested that my protagonist was a machine.

So here's a machine, one self-aware enough to be my narrator, ordered to do something it can't do -- what would happen? This particular machine is obviously devoted to caring for people, or it wouldn't be dealing with food -- would it model its behavior on human behavior? A human being in a situation like that could react with confusion, anger, fear, despair... but I couldn't think of any response other than an emotional one. Could my machine have emotions? Could the confrontation with an impossible situation create the equivalent of emotions?

I sold it to Asimov's, where it appeared in the March 1995 issue. Later I re-sold it to a couple of textbooks that used it as an example of short-short, and as a demonstration of the uses of repetition.