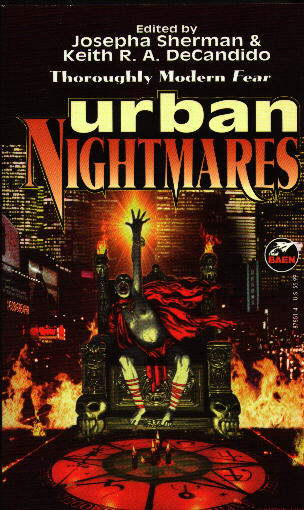 Once upon a time -- for several decades, actually, covering the second half of the twentieth century -- the regional science fiction convention for the Washington DC area was Disclave, held every spring. (It's been replaced in this century by Capclave.) For most of its latter years it was held in a somewhat down-at-the-heels hotel in New Carrollton, Maryland.

At one of the last few New Carrollton Disclaves a bunch of writers and editors were hanging around the hotel pool when the conversation turned to urban legends. Many anecdotes were exchanged, and much hilarity ensued, and in the midst of it all Keith DeCandido and the late (and much missed) Josepha Sherman came up with the notion of editing an anthology of SF/fantasy stories based on urban legends.

Several people present at the time promptly laid claim to various classics of the genre. I was there, but not among the very first to speak up; I eventually chose the "scary black man on an elevator" story as my point of departure.

Josepha and Keith sold the project to Baen, we all wrote our stories (including people who had not been at Disclave but were recruited later by the editors), and the book was published.

And that's where "Sit!" came from. It has no fantasy element at all, but I don't think anyone really cared.

There are two aspects of this that I am not entirely happy about.

First, Baen marketed the book as horror. The writers did not think they were writing horror. My story was meant to be funny, not scary. The packaging and marketing never really explained the "urban legend" premise of the book, which probably left some readers confused.

And second, I made a stupid misjudgment in my story. The punchline depends on the reader knowing that Shaquille O'Neal starred in the superhero movie "Steel," and the movie made much, much less of an impression than I had expected. It was already largely forgotten by the time Urban Nightmares

hit the bookstores, let alone even a couple of years later.

Oh, well. If the story is ever reprinted maybe I can change that to Samuel L. Jackson playing Nick Fury.