There's a key document I need to explain this story's origin properly, but I haven't been able to locate it, so I'll just have to make do. 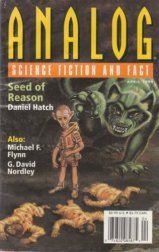 Back in the late 1990s, Scott Edelman was editing Science Fiction Age. He was also active on GEnie, as was I. And one day, in a SFWA-members-only area, he mentioned receiving a particularly bizarre cover letter with one of the stories submitted to the magazine. He quoted part of the letter to demonstrate how absurd it was.

It was, I concede, pretty silly, listing a bunch of disparate influences and ideas that were purportedly reflected in the story, everything from Marcel Proust to Marvel Comics.

While it was pompous and a lousy cover letter -- a story needs to stand on its own, and including a hard sell in the cover letter is always a mistake -- I didn't think it was quite as ridiculous as Scott did, because really, writers work everything into their stories. I mean, I know I'm influenced by the Superman comics I read as a kid, and the Shakespeare I read as an adult, and everything in between; I'll lift ideas from history, philosophy, Japanese monster movies, Saturday morning cartoons, anything that's gone into my understanding of the world.

So I decided to write a publishable story using exactly the elements listed in that cover letter. I then listed them again in my own cover letter, which is the document I wanted to find for this explanation, but couldn't.

I don't remember what they all were. I know Stan Lee was in there, and Proust, and Ursula K. Le Guin, and chaos theory, and literary criticism... but I can't recall the rest of the list.

(which is actually a pretty lousy translation of the original French title A La Recherche du Temps Perdu, but it's the standard) with H.G. Wells' The Shape of Things To Come

. I was practically giggling with delight at my own cleverness when I sent it off to Scott.

And then he rejected it, the bastard. Kind of killed the joke.

But Stan Schmidt at Analog, the second editor to see it, bought it, and it ran in the April 1999 issue.

I don't think it's ever been reprinted, which is mildly odd. I'm surprised I never included it in a collection; I guess it was too recent for Celestial Debris.

Anyway, it's the story of an English professor whose career is built on his exhaustive study of a specific dead author, and who gets a chance to communicate with her via time machine. It doesn't go quite as planned.

I'm not giggling any more, but I still think it's clever.