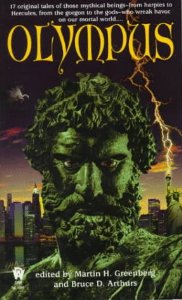 First off, let me explain that "nephelegeretes" is classical Greek for "cloud-gatherer," and was one of the standard appellations for Zeus, who was, after all, the god of storms -- Zeus Nephelegeretes.

Next, "in re:" is Latin/legalese for "in the matter of," or "concerning." So the title is legalese for, "In the case concerning Zeus." It's how a case would be listed in court records.

I never thought any editor would let me keep that title, but there it is.

So, how it happened: Bruce Arthurs was putting together an anthology about the Greek gods (eventually titled Olympus

), and invited me to submit a story.

As it happens, I had, at the time, been mulling over all the stories about Zeus taking on different shapes to seduce (or often, by modern standards, rape) human women, and I came up with the idea that if he wanted to seduce a present-day American woman, the best shape to take might be a motorcycle.

The obvious place for this to happen would be southern California.

Zeus, being the most powerful of the gods, was totipotent -- that is, any mortal woman who had sex with him got pregnant. No exceptions. Your modern Californian woman might have issues with that.

Where to go from there was tricky, but knowing that California is named for the mythical warrior queen Califia, who is now considered the incarnate spirit of the state, gave me an angle.