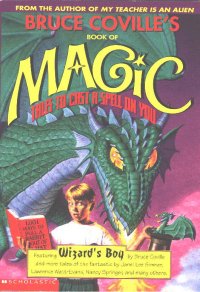 As I recall -- and this is from memories dating back close to twenty years, so I could easily have this wrong -- I originally wrote this story for a proposed Bruce Coville young adult anthology called Half Human, about creatures that were, well, half human and half something else. Bruce had invited me to write a story for it, so I did. I took one of the obvious choices, a centaur. I didn't do anything terribly clever with the concept, but I thought it was a fun little story.

Except then the deal for the book fell through. But Bruce had just made a six-book deal with Scholastic for a series of anthologies aimed somewhat younger than that, I'd written my story maybe a little young anyway, and Bruce liked it, so, hey presto! "Horsing Around" wound up in Bruce Coville's Book of Magic: Tales to Cast a Spell on You

is long out of print.

, and it was published in 2001, but I didn't get a story in it. And that one's still in print. Ah, well. But I did go on to sell Bruce several more stories.

Incidentally, Bruce Coville is a very hands-on editor -- a very good editor, but one who demands a lot more work than most I've dealt with. This story, though, I don't recall a lot of revisions. Guess I got it right the first time.