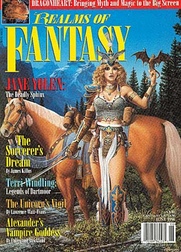 There was a period in the 1990s when Bruce Coville was editing a lot of anthologies, and was kind enough to invite me to submit stories for most of them. Since Bruce paid well, I usually tried to deliver something.

At one point he was developing a unicorn anthology, and I decided to go ahead and write a story for it even though the contracts weren't signed.

Oops. The publisher ran into problems, the deal fell through, and I had a unicorn story aimed at middle-school readers with no market.

But hey, I reworked it a little to make it a bit more adult, and sold it to Realms of Fantasy, where it ran in the June 1996 issue. As for where the story came from, I have a daughter who was a pre-teen at the time, and who was slightly embarrassed about still having a couple of dozen My Little Ponies in her room. All part of growing up, but I found myself wondering whether a real unicorn would be any better than the toy ones.

And that became "Beth's Unicorn."

It's been reprinted in The Lawrence Watt-Evans Fantasy MegaPack, and on my Patreon page and in the Subscribers area. (You can get access to the latter here.)