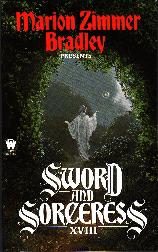 "Arms and the Woman" is a fantasy story included in Sword and Sorceress XVIII, the antepenultimate volume in the long-running anthology series edited by Marion Zimmer Bradley. The book was a May 2001 paperback original from DAW Books.

I had a story in Sword and Sorceress XVI, as well -- "Weaving Spells." That was an Ethshar story; "Arms and the Woman" is not.

It is, instead, first in what I hope will someday be a new series, set in a not-yet-named fantasy world where the wizards, dragons, and dark lords who once kept things in a constant state of chaos are extinct, having finally wiped each other out. However, they left a great deal of magic behind, and ordinary men and women find themselves having to deal with this stuff. They try to do this in an organized and sensible fashion, but plans sometimes go awry.

"Arms and the Woman" is the only story yet written in this milieu, but I've plotted a novel with the working title Meant for Each Other, and have hopes of eventually coming up with more.

The astute reader may notice certain similarities between "Arms and the Woman" and another story, "The Man for the Job," which appeared in the December 2000 issue of Realms of Fantasy. What happened was that I came up with two variations on a premise and decided to write both of them.

That's about it -- beyond that, the story speaks for itself.