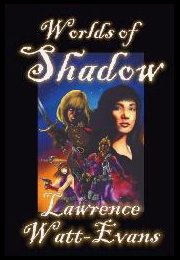 This is a three-novel series also known as "the Three Worlds trilogy." It's been reprinted both in three separate volumes and in a nice hardcover omnibus by Wildside Press. The individual volumes are:

People from present-day Earth are caught up in a war between a Galactic Empire and Shadow, dark lord of a world of magic. Blends science fiction, fantasy, and horror.

The individual pages will tell you about the separate volumes, but here's where I explain the history of the series:

In the mid-1980s I had a chat with Judy-Lynn del Rey about career planning, and she recommended that I write a Big Fat Fantasy. (The heyday of such things was still a decade in the future, but she saw it coming.) I started thinking about that, and got as far as plotting one called The Gates of Faerie that I've still never written, though some of the ideas for it got used in The Rebirth of Wonder.

But then Judy-Lynn died, and I was busy with other things (such as the Ethshar series), so I put The Gates of Faerie aside and didn't give it much thought for a couple of years.

Until one day I was sitting at home reading Locus and being annoyed that they had not considered my most recent novel (I forget which it was) worthy of a review. Instead they had a long and highly favorable review of someone else's novel (and I have deliberately forgotten title and author of that book) where the reviewer admitted, right up front, that the story was just another "war against the dark" fantasy, with nothing original about it and lots of genre cliches, but it was done well enough that it seemed fresh anyway.

Irked, I decided that I could write my own "war against the dark" story as that Big Fat Fantasy Judy-Lynn had suggested. I would jam it full of cliches -- but I would twist them all. I would see what Locus thought of that.

I started plotting it. The title was obvious -- War Against the Dark. It would have a small band of brave adventurers battling a Dark Lord, of course, and some would be from our world, because the Dark Lord was taking an interest in Earth...

But then things started to get complicated. After Judy-Lynn's death, the fantasy editor at Del Rey Books, Lester del Rey, whose own health was not good, started getting further and further behind in his work. He had always been prone to procrastination and perfectionism; one of the great services Judy-Lynn had provided for the company was nagging Lester and getting him to actually work and meet deadlines, and with her gone there was no one left who could provide this vital service.

As a result, submitting a proposal to the fantasy side of Del Rey Books was a crapshoot. It could take many months, even a couple of years, to get a response to anything. I wrote the entirety of Taking Flight while waiting for Lester to read the ten-page outline of The Spell of the Black Dagger. (That's why there were two Ethshar novels published in 1993.)

Since I already had that proposal on Lester's desk, my agent and I did not think it wise to submit another fantasy proposal until he'd looked at it. Instead, my agent suggested I come up with something that could be submitted to Owen Lock, the science fiction editor who had taken Judy-Lynn's place.

The War Against the Dark already had some minor SF elements (though it was mostly fantasy), so I went back and punched those up significantly, turning it from a Big Fat Fantasy into a pulpy cross-genre project. I liked this; I liked it a lot, actually. It would make the novel into a sort of commentary on the entire SF/fantasy field. I began to think of it as my "kitchen sink" project that would include every genre cliche, from elves to space pirates, but all done in ways no one had seen before. The title changed from the fantasy-oriented The War Against the Dark to the science-fictional Three Worlds. I began to get very enthusiastic about it. I sent it to my agent, and he sent it to Owen Lock.

Then things got complicated. Owen was, at that time, very involved in getting Harry Turtledove's Worldwar

series launched, and rather distracted, not paying a great deal of attention to my own proposal. It was only after we were well into contract negotiations that it registered with him that it could be marketed as fantasy, not just SF.

And there was the question of how much Del Rey would pay me for it. At this point we had been talking about one big fat novel. The plot was basically what became Out of This World and In the Empire of Shadow, and would have ended with an epilogue -- maybe 2,000 to 5,000 words, equivalent to a short story -- wrapping it up. My agent wanted a particular amount for the advance for it, and if we couldn't get it he was ready to take me to another publisher.

Del Rey didn't want to pay that much for it -- but they didn't want to lose me, either. Negotiations came to something of a deadlock, with my agent refusing to accept less than the amount I'll call X, while Del Rey would not go above 75% of X for what they saw as a fairly risky project unlike my previous work.

At this point I was expecting to change publishers, and was actually getting pretty psyched up about it -- much as I liked Lester he had become impossible to work with, and I never felt any great affection for anyone on the SF side at Del Rey after Judy-Lynn's death, so going elsewhere looked fairly attractive.

And then I got a phone call from my agent, who sounded rather bemused. They still refused to pay me X -- but they would pay me 3X if I turned it into a trilogy. Which would make it my first six-figure advance.

I boggled at that. That was a lot of money. That was an irresistible amount of money -- it would basically fill our kids' college fund. (In the end, along with other savings, it covered seven of their eight undergraduate years.) So I wanted to say yes.

But I didn't have three books worth of story. I could readily see how to fill it out a bit and split it into two volumes, but where would I get a third? An actual sequel would be kind of lame -- the story didn't want a sequel, and it would be an anticlimax. But I looked at that epilogue, and eventually decided I could work another book of plot into it.

So I agreed to their terms, contracts were signed, and I started writing.

And while I was writing, everything at Del Rey changed. Lester del Rey died. Owen Lock was promoted to publisher. Personnel were shuffled around, priorities shifted. And when I delivered the first book, it didn't go to Owen or any of the SF people, it went to Deborah Hogan, on the fantasy side.

Deborah is probably my favorite editor in the world, but she didn't really know what to make of the book, and didn't know where the series was going, or how dark it was going to be. Out of This World was edited, and published in hardcover, and packaged to look like a light-hearted romp. Which it wasn't; it had humorous elements, certainly, but it got pretty dark, and because the story had been split in half, it had a fairly open and very downbeat ending that had originally been intended as the protagonist's low point before he turns things around.

It didn't do very well. And it was at about this point that Del Rey laid off Deborah Hogan, so there was no longer anyone in-house who cared.

As a result, when I delivered the second volume (which had been entitled Shadows of the Empire but had to be changed because of the Star Wars novel by that name), I discovered I had a new editor. New not just in the sense of new to me, but new, as in, he'd just been hired, and had never worked as an editor before. This did not bode well.

And then someone at Del Rey (I don't know who) decided that In the Empire of Shadow should be published in trade paperback. Out of This World had not done well in hardcover, and they wanted to expand their trade paperback line, so...

Nobody wanted the second volume of a trilogy in a different format than the first.

And by the time I delivered the third and final volume, The Reign of the Brown Magician, they'd apparently given up on the series, and me, completely. They delayed publication so long they had to add a rider to the original contract, which had expired, and went straight to mass-market paperback, so that the three volumes all debuted in different formats.

So when I sent my next proposal, for Touched by the Gods, they asked my agent how much we wanted for it, and he said X (yes, the same X), they didn't make a counter-offer; they just said "no," and we took it to Tor, ending a sixteen-year relationship.

So the series (which I hadn't intended as a series) was a disaster, sales-wise -- it never came anywhere near earning out that fat advance. I still thought (and still think) it was good work, though; it just wasn't what readers had expected. Too dark. When I got the rights back from Del Rey and sold it to Wildside Press, I discussed this with the editor there, the late Alan Rodgers, and we decided to change the title to Worlds of Shadow and repackage the series as horror.

And there we are. It has space pirates and a Dark Lord and elves and a galactic empire and every other SF and fantasy cliche I could get into it, but in the end, it seems to work best as horror.

A hardcover omnibus of Worlds of Shadow is available from: