Being an excerpt from a letter to a friend, circa 1988, and slightly modified later.
Artwork by Al Feldstein, from the cover of Weird Science #15, Nov.-Dec. 1950.

Please remember that this essay is older than the internet, and seriously out of date as far as some specifics go, but on a general level it's not too bad.

I can't tell you what to expect at any specific convention unless it's one I've attended.

However, let us consider a fairly typical convention--say, a Boskone or a Balticon. (I originally used Rivercon, in Louisville, as an example, but Rivercon doesn't exist anymore.)

You will find the following at almost every non-specialized good-sized convention:

That's everything that comes immediately to mind. Let me run through them in a bit more detail:

The con suite: Usually a two-room suite in the main hotel, but it can be any convenient space of moderate size--or an inconvenient space, for that matter. It's equipped with some furniture, drinks, munchies, often a noteboard of some sort; some will have a bar and bartender, while others are self-service with canned drinks in an iced bathtub. The alcoholic content of the beverages varies according to the prejudices of the con committee and state laws--or sometimes just behavior at past conventions in the area. This is intended to be a general gathering place, where people can drop in and chat at any time of night or day; in practice, at many conventions the more experienced con-goers often know better places, so that the people in the con suite are neos, or people who've been locked out of their rooms accidentally, or other people at loose ends.

The video room: A large TV, video device (to give you an idea of how out of date this is, I originally said "VCR"), lights off, plenty of seating. Old TV shows and Japanese animation are the standard fare, as far as I can tell; I've never spent much time in video rooms, because I always figured I could watch TV at home. Other people, particularly fans of Japanese animation, don't see it that way; some people go in there on Friday and don't come out until Monday. There's usually a schedule posted somewhere, which usually reflects hope more than reality.

The film room: The size of the budget determines whether you get "Who Framed Roger Rabbit?" (that was new in '88; substitute recent big movie of your choice) or "Plan 9 From Outer Space." There's usually at least an attempt to mix old and new, classic and obscure. I've seen a few movies at cons, but that's not what I go to conventions for. It is what some people go for--some of these films you won't find anywhere else, and once you're a con member they're all free. Nowadays, with so many other sources of movies and videos, video and film rooms are much less common than they were in 1988.

Gaming: Varies wildly, depending on who's available to do what. I've seen conventions where the gaming was all cancelled for lack of interest; I've seen conventions where world-famous game designer Steve Jackson was testing his latest creation on fifty enthusiastic volunteers. Usually, you get D&D or one of its imitators, a wargame or two. I do my own gaming online, not at cons.

The art show: Lots of pictures on the walls. At a major convention you'll get beautiful paintings by professional artists--cover paintings and the like--on display next to pen-and-ink drawings by rank amateurs. At small conventions you mostly get the amateurs. Generally, most of the artwork is for sale--just how this is worked varies, but there's almost always a system of bidding that may or may not put a given work into a voice auction.

The huckster room (sometimes called a dealers' room): Rows of tables with stuff on them that the people sitting behind the tables are trying to sell you: magazines, books, costumes, swords, movie memorabilia, T-shirts, games, jewelry, and all manner of other stuff, generally with at least some connection with fantasy and science fiction.

Room parties: Conventions are generally held in hotels. People rent rooms, and throw parties in them. There's often an ulterior purpose to this--see "bid parties" and "con parties," below. Some parties are by invitation only; others are "open" (which ideally means the door is open and anyone is welcome to walk in, but hotel security people sometimes have other ideas). Parties, at conventions or anywhere else, are parties.

Panels and other programming: This is the nominal excuse for the whole thing, usually. Besides panels, there are readings, discussion groups, autograph sessions, etc., but I didn't list those separately because not all conventions have them. A reading is an author standing there and reading from his work--usually from something that isn't published yet. An autograph session is an author (or artist or editor, actually) sitting at a table signing copies of his work--or signing the program book, if there's a fan who forgot to bring his copy of the author's latest, or a fan who didn't know a given author would be there. Discussion groups can be almost anything. Panels consist of from one to, oh, I guess the most I ever saw was nine people sitting at the front of a room discussing a predetermined topic for the amusement and edification of the audience; for example, at Readercon one year Samuel Delany, Darrell Schweitzer, Terry Bisson, Paul Parks, and I discussed why so much SF and fantasy is sexist, racist, or both, and what should be done about it. There may also be speeches, either attached to a banquet or separately. These are mostly made by writers and are designed to be entertaining, so they aren't anywhere near as dull as most speech-making you've probably had to put up with.

People hanging out at the hotel swimming pool: Self-explanatory.

Bid parties: These are parties put on by people who want you to do something for them, like vote for them to host a Worldcon. They'll have signs up about "DC in '17," for example. If you attend the party (bid parties are always open, by their very nature) you're likely to be handed a flyer and encouraged to ask questions about why you should vote for Washington rather than Orlando; there are often tourist brochures, pictures of the convention facilities, etc. These are usually ignored, for the most part, in the interest of having a good party. Besides Worldcons, people bid for some of the "floating regionals," like DeepSouthCon or Westercon. Some bid parties have been so successful that... well, the Minneapolis in '73 bid lost, but they're still holding parties anyway, fifteen years later. New Orleans got the '88 Worldcon despite mediocre facilities and really inept organization by (a) having a wonderful city, and (b) throwing great parties.

Pros: People who make money off science fiction; writers, artists, editors, etc. Me, for example. Some fans are under the impression that all pros are snotty, egotistical, and inaccessible, but we really don't try to be. We do tend to hang out with other pros and attend pros-only parties because that way we can talk shop; writing's a very solitary business, and conventions are the only times we ever get to meet our colleagues in person.

Con parties: Like bid parties, but advertising other conventions, usually not too distant, that would like to attract more people. For example, at Balticon, in Baltimore, there will be con parties advertising Disclave (Washington) [Well, back in '88 this was true; Disclave is dead now] and Philcon (Philadelphia).

Hall costumes: Some people like to dress up for SF cons. Forrest J Ackerman started this back in 1939 by showing up at the first Worldcon in a Buck Rogers outfit, and it caught on, so you'll see people dressed as barbarians, Star Fleet officers, and so forth roaming the halls. "Hall costumes" are costumes designed to be worn in public, rather than on stage in the masquerade; some could not be worn on the street without getting arrested, though. 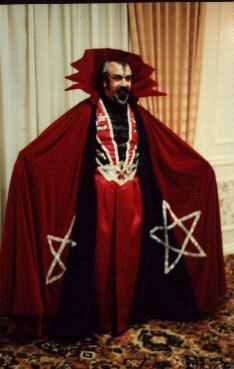 The masquerade: This is where costumers get to show off officially; an announcer introduces them, they parade across a stage (in character) or perform a little skit to display their costumes, and usually there are judges who choose the best in various categories and hand out little certificates or something. At a small convention you're likely to have a dozen entries, three of them Darth Vader; at a big convention you could get up to a hundred, some of them staggeringly complex and beautiful.

Lots of strange people: Science fiction fans are traditionally supposed to be people who don't fit into everyday life very well, and who prefer to concentrate on fictional worlds instead. This is by no means always true, but you do get a lot of strange people at SF conventions. 99% are harmless. You learn not to be distracted by the women in medieval gowns with stuffed dragons on their shoulders, the guys dressed in fur loincloths, the people with vests literally covered with buttons saying things like, "TARDIS Repair Mechanic -- ANY time, ANY place!"

Entertaining people: You'll find people at cons who know all sorts of weird things and love to talk about them. I've discussed medieval theology, particle physics, and "Mr. Ed" at conventions.

Geeks: (A word that's subtly shifted meaning since 1988.) Unfortunately, a few fans are outright losers, even by the standards of other fans; however, fandom prides itself on tolerance, so nobody drives people away just because they haven't bathed since Nixon resigned, or because they think Ronald Reagan's a left-wing pansy. They're just ignored as much as possible. If you find yourself stuck with one of these people, just remember that you've got to meet someone at the other end of the hotel right now for a private get-together, and much as you'd like to, you can neither stay and chat nor bring your new "friend" along.

In-jokes: Fandom's been around for fifty years, and has accumulated a lot of tradition and mythology. Don't worry if you don't know why everyone laughs at the mention of lime Jell-O; just ask someone, and they'll tell you (if they know). It's understood that everybody has to start at the beginning, and it takes time to learn it all.

Flyers advertising other conventions: These are handed out at parties, free for the taking, and are usually also piled on a table somewhere near registration. A good way to find out about all the conventions in your area is to attend one, and pick up one of everything on the freebie table.

So, what are conventions like? Whatever you want them to be. A three-day film festival, a D&D tournament, a weekend of partying, a chance to meet real writers, serious discussion of literary or scientific issues, whatever you want. Hordes of people, ranging from infants to ancients; they used to be mostly between fifteen and forty, but nowadays (2015) they trend much older, as younger fans often prefer online activities or other sorts of gatherings. (The greying of fandom has been a cause for concern in some circles.) You can knock yourself out trying to do and see everything (which you can't, except at very small conventions) or you can just settle somewhere casually and chat with people.