I got an invitation from Richard Gilliam -- he (along with Marty Greenberg and Ed Kramer) was putting together an anthology of stories about the Holy Grail. I believe it may have had a connection with the World Fantasy Convention, but I don't really remember -- it's been more than twenty years. 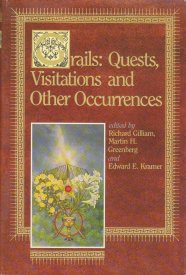 Anyway, I was invited to contribute a story.

I had never written anything about the Grail. I'm not especially interested in Arthuriana, and I'm not Christian, so it just hadn't come up in any of my work. I did like selling short stories, though, so I sat down and gave it some thought.

The essence of the Grail, really, is that it's a divine mystery. It's so holy that no one can ever possess it or understand it. Although the legends are pretty much all medieval, there's nothing inherently medieval about it; it's as eternal as God Himself. In some versions of the Percival legend, it was taken into Heaven -- it was too holy to remain on Earth -- but it still exists.

So why not use a contemporary setting? What's the Grail up to these days? A vision of the Grail appeared to Arthur's knights and sent them on a quest for it, which did not end well for most of those who sought it; what would happen if such a vision appeared to someone now? Not a knight, just a guy, an ordinary man living in our own everyday world.

And that's the story I wrote. 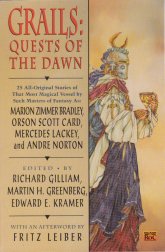 . It took a couple of years before a regular trade edition appeared, and when it did it was split into two volumes: Grails: Quests of the Dawn

and Grails: Visitations of the Night

. My story is in Grails: Quests of the Dawn

Incidentally, there was some uncertainty about whether the story's title was "Vision" or "Visions." I thought it was "Vision," singular, but the published text says "Visions," plural, so what the hell, I guess it's plural.

I don't recall the story ever being reprinted anywhere else except an Italian translation of the anthology.

Also, while assembling this page I discovered that there was a mass-market edition of Grails: Quests of the Dawn

, published in 2004. This is the first I've heard of it; I never got a contributor's copy, which is pretty annoying.