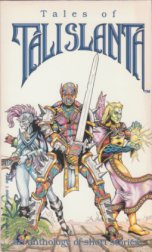 Once upon a time I was contacted by a guy named Stephan Michael Sechi, who I had never heard of. He was a game designer, a partner in an outfit called Bard Games, and the creator of Talislanta. He was trying to put together an anthology of stories set in the world he had created.

Ordinarily I'm not terribly enthusiastic about things like this, but the Talislanta material he sent was pretty nifty, so I decided to give it a shot, and wrote "Tulki's Revenge," a fantasy adventure involving sea people and windships and so on.

I was pretty happy with it. The editor, however, wanted it cut -- he thought it went on much too long after the climax, and that the characters reacted inappropriately at one point. (To which I say, he's clearly never been in a situation like that, because that's exactly how people react.)

I couldn't sell it anywhere else, so I made some of the requested changes, but that settled for me that I would never again write anything for this guy. And then I waited for more feedback, or for the book to be published.

And eventually discovered that Bard Games had gone bankrupt before publishing the anthology.

So I wrote the whole thing off and more or less forgot about it, until one day I was contacted by Wizards of the Coast. They'd bought the rights to Talislanta, and intended to publish the anthology, and wanted to make sure the contracts were still good.

I pointed out that I'd been arguing with the editor about my story, and they told me he's not the editor anymore (though he was still very much involved with the game he'd created), and we reached an agreement about using the story in more or less its original form.

The book came out under the name Tales of Talislanta

, I received my contributor's copy, and I never heard from them again. I have no idea how it sold -- though the fact that they passed Talislanta on to another publisher in 1994 would imply it didn't exactly set the world on fire.

I liked my story, though. I can't reprint it anywhere, since it's tied to the game, which is rather a shame. This is what taught me to get exceptions written into work-for-hire contracts whenever possible.