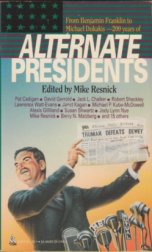 Mike Resnick was putting together an anthology, Alternate Presidents

, and he invited me to participate. The deal was that each author would choose a past presidential election and write an alternate history looking at what would have happened if a different candidate had won.

I thought that sounded like fun, and agreed to write a story. Then came choosing my president.

We weren't allowed to invent fictional candidates, and each author had to choose a different year. Alas, my first few choices had already been taken before I got my turn. I didn't want to tackle anything more than roughly a hundred years back; I'm just not that familiar with political history prior to the 20th century.

So I settled on 1932. That was certainly a pivotal election; the hard part was figuring out how it could have gone differently, given that Herbert Hoover, then known as "the most hated man in America," was determined to run for a second term.

I did my research, though, and discovered that after FDR got the Democratic nomination there had been a movement to run Al Smith (who had been the losing candidate in 1928) anyway, splitting the party.

Smith wasn't stupid and refused to cooperate, so Roosevelt went on and coasted to election -- but what if Smith's ego had overridden his good sense? The Democrats would have been split, there would be bitter infighting, and Hoover might squeak through to a second term. He would be ferociously unpopular and saddled with a hostile Congress while the economy remained in shambles.

Now, how to get a story out of that?

Lots of stuff. Hoover would have been struggling with economic issues, as FDR did, but would never have been as drastic in tackling them as FDR was. And overseas...

Well, the fact is, Roosevelt focused almost entirely on domestic matters in his first term. There was plenty there to keep him busy. He did little or nothing to slow the German, Japanese, and Italian incursions elsewhere.

But Hoover was an old China hand, and in his single term his secretary of state, Henry L. Stimson, was a strong advocate of containing the Japanese. Add in the political advantages of distracting people from their own problems with exciting action far away, and it's entirely possible that under Hoover the U.S. would have intervened when the Japanese abrogated the 1922 Washington Naval Treaty in 1934, and again when the Italians invaded Abyssinia in 1935. (Roosevelt ignored both these violations.) That might stiffen a few spines in Europe, too -- the British and French wouldn't want to be shown up by the Americans.

The result: A series of small wars and confrontations, and no Second World War. Fascism contained, but not destroyed. Hitler assassinated, but the Nazis still in power into the 1950s.

In fact, the world is so utterly different by Stalin's death in 1952 that I didn't try extending my alternate history beyond that.

So I had my background and needed a story, and looked at some of the social implications of a world living with a Nazi Germany that had stopped short of blitzkrieg and death camps.

Most people who read the story probably didn't pick up all the background I've explained here; I tried not to do a massive info dump, but just filled in some of the broad outline. It wound up quite a short story, really just a conversation about filling an ambassadorship. I probably did more research and planning per finished story word than in anything else I ever wrote. I suspect that it doesn't really work as a story outside the anthology, where the premise supports it.

Sometimes I think I should write more, maybe an entire novel, set in that alternate history -- but it would be pretty depressing, so I probably never will.