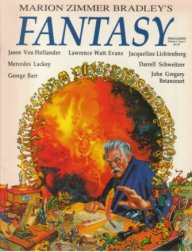 Prior to 1987, I hadn't really gotten the hang of writing short stories. I wrote several -- about thirty that got to the point of actually being submitted -- but they mostly weren't very good and they mostly didn't sell. The break-through came rather suddenly with "Why I Left Harry's All-Night Hamburgers" -- after that I knew what I was doing and sold almost every short story I wrote, though I can't really put the difference into words.

Part of the problem with those early stories was that I was using some unfortunate examples. I was trying to write like people who really weren't suitable models -- Clark Ashton Smith, Lord Dunsany, Robert E. Howard, Fritz Leiber Jr., H.P. Lovecraft, Lin Carter, etc. Notice that most of them were long dead, and all were highly idosyncratic writers.

One of the stories I wrote back then was called "The Palace of Llarimuir," and it was deliberately derivative of Smith and Dunsany and Howard. In fact, I wrote a couple of stories about Llarimuir, a nigh-omnipotent wizard -- "The Wandering Wizardling" is the other I can remember right now, and there may have been more. They didn't sell.

"The Palace of Llarimuir" was a sword-&-sorcery adventure set in a city called Threar, written in a style that attempted to emulate the mythic feel of Dunsany and the decadent exoticism of Smith, with a plot that echoed Howard. 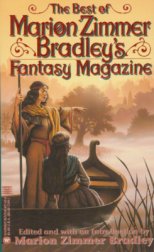 I don't remember when I wrote it, or where I sent it. It might date back to the 1970s, and I almost certainly tried it at Fantastic, but beyond that it's just guesswork at this point.

Anyway, it sat in a metaphorical drawer for years. But then in 1987 Susan Shwartz invited me to submit a story to her anthology Arabesques: More Tales of the Arabian Nights

. (This may have been my very first anthology invitation; I'm not sure.)

It was a fairly short deadline -- I don't think I was on her original list of invitees -- and I didn't have any brilliant ideas for a new story, but it occurred to me that I could rework "The Palace of Llarimuir" into an Arabian Nights setting without too much trouble.

So I pulled the old story out and rewrote it, changing Threar to al-Tahrir, and Llarimuir to al-Tir al-Abtan (these names are real Arabic, but I forget what they mean). I retitled it (obviously) "The Palace of al-Tir al-Abtan." The general tone of the story was already suitable, but I rewrote it anyway because I was a better writer in 1987 than whenever I'd produced the original. Then I sent it to Susan.

She rejected it, saying she preferred stories with more character development. Which was fair enough.

Having rewritten it, though, I figured it wouldn't hurt to try it somewhere else, so I sent it to Marion Zimmer Bradley's Fantasy Magazine, and to my pleased surprise, they bought it.

What really surprised me, several years later, was when they included it in The Best of Marion Zimmer Bradley's Fantasy Magazine.

I also included it in my short story collection Crosstime Traffic

because hey, why not?