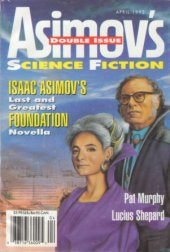 This one started when I read The Day the Laughter Stopped

, by David Yallop. I found myself thinking that it was a real shame no one shot William Randolph Hearst when they had the chance.

And hey, I'm a writer -- if I want something done, I can have a character do it. So I dropped a time traveler in the appropriate time and place, and had him dispose of Mr. Hearst.

But what would happen next?

Well, he couldn't go home; killing Hearst would have altered history, and our man would never have been born. So he's stranded in the 1890s with a head full of history and a Colt revolver -- what would he do?

From there it was easy.

I wrote it, sold it to Asimov's, and there you go. Oh, and I included it in my collection Celestial Debris

One more little anecdote about this story. I got an inquiry from a Slovenian publisher who wanted to translate and publish it, and who would actually pay money to do so -- at least, he said he would. The only catch was that he wanted to add Slobodan Milosevic to the list of great monsters of the 20th century.

I was no fan of Milosevic, but honestly, I couldn't quite see how he would have been around and findable in the altered timeline I described, so I said no.

I never heard anything more from Slovenia. Sometimes I wonder whether I made the right call on that one.