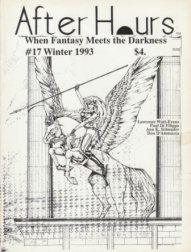 The original title of this story was simply "The Ritual." The editor changed it. This sort of thing is not unusual.

My apologies for the quality of the scanned image to the right, with those extra smudges across the lower half; it's what I had. I've never seen an undamaged copy of After Hours #17.

As for the story's origins, one day I sat down at the keyboard and wrote the opening scene, with the pentagram in a fancy office, as a sort of warm-up exercise. I do those sometimes. Sometimes they take off, sometimes they don't.

This one wanted to take off, but it was pretty wobbly. I didn't really have a story, and sort of built it up as I went along. I was maybe halfway through before I realized how it was going to end, with something other than the sun rising.

I didn't think it was a terribly good story, and I was trying to decide where to send it when After Hours cropped up looking for fiction. Since I wasn't optimistic about selling it to a major market like F&SF, I sent it to them, and they bought it, and it appeared in #17, the Winter 1993 issue. (My old bibliography says 1995. It's wrong.)

I don't think it's ever been reprinted except in my collection, Hazmat & Other Toxic Stories.