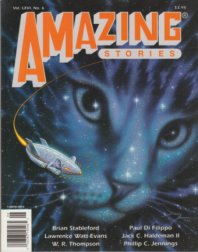 You know, it's a funny thing -- until I started putting this page together, I had completely forgotten that "The Drifter" was originally published in Amazing. I thought it had appeared in Asimov's, instead. Don't know why I thought that.

I had been thinking about various conceptions of parallel worlds, and how there were all these unexplored assumptions in the way most writers treated them. This same chain of thought had previously produced "Why I Left Harry's All-Night Hamburgers," and would go on to produce other stories, as well.

In this case, though, here's how I looked at it. In most parallel world stories, people talk about "timelines," but they don't treat them as lines; they treat them as tubes. If you go from World A to World B, it takes energy, and when you stop applying energy, you stop moving, and stay in whatever world you're in. But why? That isn't how physics works in other dimensions. If alternate realities all exist simultaneously side by side in a sort of hyperspace, and you find a way to move sideways out of the one you started in and into another, why would you stop there? Why assume there's some sort of interdimensional friction? If you have an object in space, moving in a straight line, and you apply force at right angles, it moves out of its original line and keeps on going at an angle, it doesn't fall into a parallel path and resume its original direction one quantum over.

So crosstime travel might be a whole lot more complicated than it's usually depicted.

I dealt with the difficulties of navigating in pandimensional space in other stories, but in "The Drifter" I looked at the lack of friction, and the problem of inertia, i.e., an object in motion remains in motion unless acted upon by an outside force.

I think it's interesting. So do other people, apparently -- an outfit called the Radio Pirates adapted it as the premier episode of a series called "Radio Free Tomorrow." Alas, the series never got off the ground, but I have the tapes they sent me. It's pretty cool.

And I included the story in my collection Crosstime Traffic

, so you can check it out if you're interested.