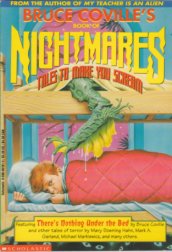 Bruce Coville was putting together a series of six anthologies of scary stories for kids. They were prestigious and paid well, and Bruce was a good guy to work with -- one of the toughest but best editors I've ever encountered.

So I wanted to get stories into as many of them as I could, and I was reasonably successful. I sold "Ghost Stories" to Bruce Coville's Book of Ghosts

, and "How I Maybe Saved the World Last Tuesday Before Breakfast" to Bruce Coville's Book of Aliens

, and "Horsing Around" to Bruce Coville's Book of Magic

I missed out on Bruce Coville's Book of Monsters

I didn't have anything ready to go, so I gave it some thought. I wanted something that was nightmare material, but not too strong for a kids' book. I came up with "The Cat Came Back," a tale of undead vengeance among household pets.

Bruce bought it -- but only over the objections of his assistants, who thought it was too familiar. There wasn't anything original about it, they said.

That was pretty much true, but on the other hand, as Bruce pointed out, the readers would be kids -- they probably wouldn't have encountered the idea before. Sure, it'd be old hat to their parents, but they weren't the target audience. So it went into the book.

I never heard any complaints, so I guess it was good enough. The anthologies did well enough to inspire a second series.

"The Cat Came Back" has been reprinted in my collection, Hazmat & Other Toxic Stories.