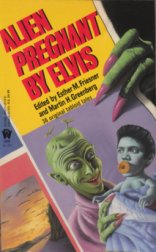 I like Esther Friesner. We had collaborated on a novel, and everything. So when she started to put together the anthology that became Alien Pregnant by Elvis

The anthology's premise was SF and fantasy stories based on tabloid headlines. One of my favorite tabloid stories ever -- I liked it enough I actually bought the stupid thing off the newsstand -- was a Weekly World News piece about a guy whose wife left him to run away with, not another man, or even another woman, but Bigfoot. She'd always been a bit of a hippie, the husband said...

So with that for my inspiration, I wrote "The Bride of Bigfoot," and Esther bought it, and life was good.