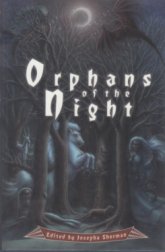 I got an anthology invitation from the delightful and much-missed Josepha Sherman; she wanted stories about creatures from folklore who aren't seen as often as elves, dwarves, and the usual crew.

That sounded like fun, so I did a little research on bogles -- Scottish creatures akin to, but not the same as, goblins. (My grandfather was Scottish, in case you're wondering why I went that route.)

Given that I was writing a story about bogles for a modern American audience, the plot practically composed itself. Easy.

In fact, the only tricky part was when I tried to quote the opening line of Led Zeppelin's "Black Dog." I was informed that Zeppelin's usage fees were notoriously high and would make the whole story unprofitable. So I removed the lyrics. Originally I wanted to say "the opening words of Led Zeppelin's 'Black Dog,'" but Josepha thought even that might be risky, so now it just says "Deafening music roared from the speakers."

Sigh. I'd rather be more specific. But it'll have to do.

The book is called Orphans of the Night