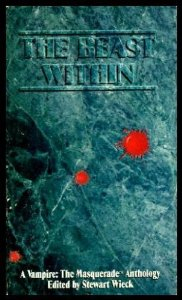 In the early 1990s an outfit called White Wolf Publishing burst onto the scene with a slew of role-playing games collectively called "The World of Darkness." For a few years they were wildly successful; then the fad passed. They're still around (under new ownership), but nowhere near the big noise they used to be.

For awhile, though, they were huge, to the point their game "Vampire: The Masquerade" has been an influence on vampire mythology ever since.

So one day in 1993 (I think), I was contacted by one of the company's founders, Stewart Wieck. They were putting together anthologies based on some of their games, and I was invited to write a story for them. He sent me a bunch of stuff about "Vampire: The Masquerade."

I thought it looked pretty neat. I thought some of the vampire clans described, and some of the names, were stupid, but most of it -- the hierarchies and rivalries and so on -- were great. I particularly liked that one clan was obsessed with art. I'd studied art history in college -- it wasn't my major, but I sometimes say I minored in art history, because I took far more art courses than anything else outside my major. (Princeton doesn't officially have minors.) I liked the notion of vampire art appreciation.

So I wrote "The Art of Dying," and Stewart included it in the anthology The Beast Within

He apparently liked it enough to want more, so it has a sequel: "Eye of the Beholder." And I was clever enough (for once) to make sure that even though it was work-for-hire and I had no claim on royalties or future use, I did have the right to include both stories in single-author collections, so they're both in In the Blood

, the collection of all my vampire stories.