Who is Tom Derringer?

Tom Derringer is a professional adventurer in a world where that's a recognized career choice -- a world that somehow manages to be very much like our own despite the existence of sunken Atlantis, lizard men, deserted cities that mysteriously appear and then vanish again, and so on.

Born in upstate New York in 1866, at the age of eight John Thomas Derringer Jr. discovered his late father's journals and learned that both his parents had been adventurers. He resolved to carry on that tradition, and with his mother's help spent the next eight years training intensively -- so intensively that he neglected many of the normal experiences of adolescence, leaving him a little naive in some respects.

Then in 1882 he set out on his first adventure, pursuing a mysterious flying object seen in the skies above the Arizona territory... 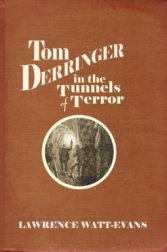 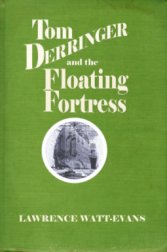 And then there were these:

And if the series goes on long enough, and gets up to 1914 et seq., there would be these two:

What's more, it's occurred to me that I could easily go multi-generational; after all, Tom's father, Jack Derringer, was an adventurer, too. I've worked out that Tom's son, Johnny Derringer, could easily fit in the pulp era (I think the first in that series would be Johnny Derringer and the Crime Lords of Atlantis), while two of Tom's grandchildren, the Derringer twins, J.T. and Thomasina, would be around for the Cold War. J.T.'s kids, under the guidance of their Aunt Tommy, get us almost to the present day.

For more than twenty years, people have been telling me I should write "young adult" fiction. The thing is, I never read YA fiction in the modern sense of the phrase. Oh, as a kid I read lots of stuff aimed at younger readers -- the Heinlein juveniles, Tom Swift Jr., and old boys' adventure stuff like Bushranger's Gold, as well as classic Victorian stuff like Treasure Island -- but nothing written after 1965. I honestly didn't know what "YA" meant in modern terms.

(I could have gone out and got some and read it, for research purposes, but I didn't.)

Still, when I was at loose ends a few years back I decided I should give it a try. Steampunk was big, so I figured I'd write a YA steampunk novel.

Thing is, I hadn't actually read any steampunk novels, either. I was a big fan of Phil and Kaja Foglio's Girl Genius, but they explicitly don't call that steampunk -- it's "gaslamp fantasy." I'd seen lots of costumes and gadgets, but not read the books.

I went ahead anyway.

The result was Tom Derringer and the Aluminum Airship. Which, my agent informed me, was neither YA (since I'd written it in first person, i.e., in late Victorian prose that modern kids might find difficult) nor steampunk (since it lacked any "punk" elements).

What it was, I eventually realized, was more or less an edisonade. In the late 19th century stories of boy inventors having adventures (the original Tom Swift is an example, but he was preceded by Frank Reade and Thomas Edison Jr.) were popular. The term "edisonade" is of much more recent vintage, naming the genre after the real-life Thomas Edison. I hadn't written steampunk; I'd recreated and updated the old adventure stories I'd loved as a kid.

Tom Derringer isn't an inventor, though his sidekick Betsy Vanderhart has been known to cobble together useful equipment, but it's the same spirit -- when Tom needs an airship he buys one, rather than building it, but he still winds up flying.

Any of those old adventure stories that was remotely successful spawned sequels and turned into a series -- Tom Sawyer, Frank Reade, Tom Swift, etc. So obviously I needed to make Tom Derringer a series, and accordingly I ended the first volume with a hook for a sequel.

What's on this page: