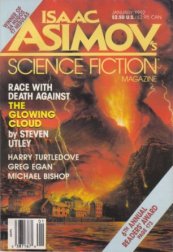 , in which he posited travel between alternate realities that produces "ballistic recoil" -- when you displace something from one universe into another, there must be a balancing action somewhere.

I got wondering about the universes that don't know anything about visiting parallel worlds, but are getting stuff dumped on them by neighbors who do. The neighbors might not even know they're doing it.

There was also a Gordon Dickson story -- I've forgotten the title -- about "reality storms," which gave me an image to work with.

Anyway, if this is an ongoing phenomenon, people will organize a way to deal with it -- that's what people do. So I wrote a story about the guys whose job it is to cope with bits of other universes that suddenly appear in their own.

I didn't have any particular market in mind when I wrote it, so I sent it to Asimov's, which was the top market at the time, and Gardner Dozois bought it. Naturally, given the subject matter, I also included it in my collection Crosstime Traffic