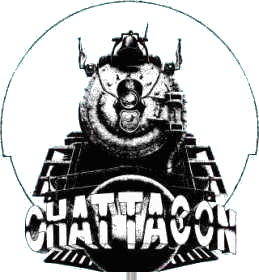 This was a short-short I wrote for the Chattacon XVII program book. I don't think it's ever appeared anywhere else.

Basically, I was thinking about science-fictional tropes (as I often do), and asked myself, "Why is hyperspace always presented as something out there in space? If it's possible anywhere, why not on a planetary surface? And if it's on a planet, you wouldn't use spaceships..." Chattacon's logo at the time was a steam engine -- the Chattanooga Choo Choo -- which settled just what one would use instead of spaceships. Then I just had to say why and turn it into something vaguely resembling a story.

It's not much of a story, but I like it. Maybe someday I'll write something more serious with the premise.