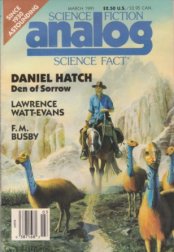 Someone on GEnie -- I think it might have been Ray Feist -- was bemoaning how today's (well, what was "today" at the time, circa 1988) readers are more sophisticated than the audience Golden Age science fiction writers had to deal with, so a writer can't get away with absurdities that readers used to take in stride.

The example he used was that these days no one's going to accept a story where two kids build a spaceship in their back yard.

I took that as a challenge, and set about figuring out a scientifically-plausible way for two kids to build a spaceship in their back yard.

I don't remember what, if anything, I said to anyone at the time, but the notion was planted, and I started working on the idea.

I had the story mostly written at the time of the 1988 Worldcon in New Orleans. I attended the convention on very short notice, and to my astonishment won the short story Hugo for "Why I Left Harry's All-Night Hamburgers." After the ceremony I wandered from party to party in something of a daze.

I got congratulated a lot. At one party I ran into Stan Schmidt, editor of Analog, who jokingly asked when I was going to send him a story.

"It's about two kids who build a spaceship in their back yard," I said.

His smile sort of froze and turned into something else entirely. Really, his expression was priceless; I wish I'd had a camera with me.

"They live in an orbital colony," I added. And his expression thawed and transformed as comprehension came, and then he was smiling again, with what looked to me like wonder and delight.

So when I finished the story a couple of weeks later I sent it to Stan Schmidt, and he bought it, and it appeared in the March 1991 issue.

I had kept the science as accurate as I could. I had my characters laughing hysterically at the very idea of kids building a spaceship in their back yard on Earth, but inspired by an ancient book describing just that.

I think it's pretty good, so I included it in Crosstime Traffic

. At one point I even thought about expanding it into a middle-grades novel, though I eventually abandoned the idea.