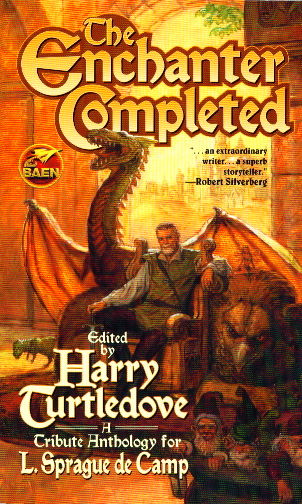 Ever since I was a kid, I liked L. Sprague de Camp's work. He had a way of following through logic and using common sense in fantasy settings that really appealed to me, and which I've tried to emulate in my own writing.

This being the case, when Harry Turtledove said he was putting together a de Camp tribute anthology and asked if I would contribute a story, I jumped at the opportunity.

Of course, then I had to figure out what I wanted to do with which of de Camp's creations, and there was an odd little item he'd left hanging in one of the Harold Shea stories. In "The Wall of Serpents," when Harold Shea fetches Walter Bayard from Xanadu to the realm of the Kalevala, he inadvertantly brings one of the girls of Xanadu with him. (She's later sent back.)

But she's named Dunyazad. Dunyazad isn't from Coleridge's "Kubla Khan" at all; she's Scheherazade's sister in the Thousand Nights and A Night.

That didn't make any sense to me. De Camp may have been making a little joke of some sort, perhaps referencing the fact that Coleridge mixed some random elements from elsewhere in Asia into the Chinese setting of his poem, or maybe he just wanted a random exotic name and didn't worry about the incongruity, but to me, throwing a Persian noblewoman in as a slave girl in a fantasy version of China needed an explanation.

So I wrote one, and Harry included it in his anthology, published by Baen as The Enchanter Completed, April, 2005.

Since the story wouldn't be very intelligible to anyone who hadn't read The Castle of Iron and "The Wall of Serpents," I've never tried reprinting it anywhere.