Back in the 1980s, CBS revived "Twilight Zone" and it became known in the writing community that they would consider submissions from freelancers, not just WGA members.

The idea of breaking into writing for TV had a lot of appeal, and I had a story idea I thought might work as a TZ episode, so I wrote it up as a story treatment, and they bought it, and sent me the standard union contract which was an amazing thick document like nothing I'd ever seen before, and the Writers' Guild of America sent me membership information, and I got a chunk of money all out of proportion to the forty-five minutes I'd put into writing the thing. 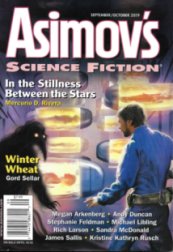 The contract bought the story in perpetuity, with no provision for reversion, so I was done with it. My story treatment went into the production queue, got turned into a script by Martin Pasko...

And then CBS dropped the show, and the syndicated continuation had a new story editor, and my story stayed in the production queue but got dropped further down the list, and then the show got canceled and my story was never produced. But they'd bought it in perpetuity, so I never got the rights back, and it's been in limbo ever since.

But... the TZ story editor pointed out to me that they'd bought it forever, yes, but they didn't buy all rights. Specifically, they hadn't bought prose rights. I could still write and sell a short story with that premise.

But I didn't have any particular reason to do so, and by then the story was out of date, because it had Cold War elements and the Cold War was ending, so I put it aside for later.

"Later" turned out to be 2018. That year Warner Brothers optioned the film rights to "Why I Left Harry's All-Night Hamburgers," which prompted me to pull out all my unfinished old stories about Harry's, and for reasons I don't remember I had filed my old TZ story in the same folder as those.

Thus reminded of its existence, I decided to go ahead and write the prose version. It had to be completely reworked due to all the changes that had taken place in the thirty years since I set it aside, and about the only thing that survived from the original is the central concept. I don't even think I'd used the title "Personal Space" before.

But I wrote it, and sent it to Asimov's, and they bought it for the October 2019 issue.