Out of This World is the first volume of the Worlds of Shadow trilogy, a story of people from our world caught up in the conflict between two other universes -- the Galactic Empire, in a universe where the laws of physics resemble those of 1930s pulp SF, and the Realm of Shadow, in a reality where magic works.

In this first volume, half a dozen people from Maryland are transported first to Shadow's world, and then to the untamed outskirts of the Galactic Empire.

They aren't trying to overthrow any evil overlords; all they want is to survive, and if possible, go home.

Out of This World

The long sad story of how I came to write this novel is on the page about the Worlds of Shadow series as a whole; the series was always considered a single story split into three volumes.

I will mention, though, that some of the descriptions of the odd wrongness of ordinary details of life in the Galactic Empire were inspired by visiting Mexico, where the locals often try to cater to the tastes of gringos but get things slightly wrong. I also took details from Mammoth Cave, London, Paris, and other places I had traveled to.

The places in our world are all real, and described as accurately as I could manage, except that there is no 21550 Goshen Road; that address falls in a gap between two pieces of the real Goshen Road. Or at least it did in 1993. The prison that the crew of the Ruthless is bailed out of is visible from I-270, and I've driven past it countless times, but I've never been inside, so the details there are quite likely somewhat off.

My knowledge of the operations of Air Force Intelligence, such as it is, is based on being interviewed by them when a friend of mine who was getting a security clearance gave me as a reference; I asked almost as many questions as I answered, figuring it would be useful information to have. 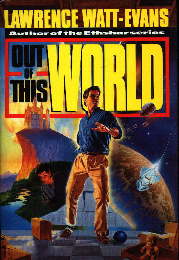 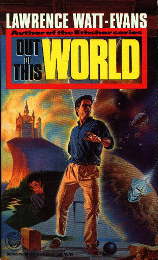 About Out of This World: