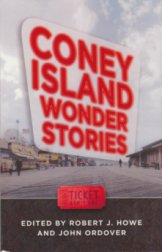 In the late 1970s I acquired a very nifty book: The Great American Amusement Parks, a Pictorial History by Gary Kyriazi. It's exactly what the title says, but with a certain bias -- eighty of its 244 pages are devoted to Coney Island.

I read the book. I loved the book. And I was fascinated by the descriptions of Coney Island's glory days, the first decade of the twentieth century, when three great amusement parks dominated the island: Steeplechase Park, Luna Park, and Dreamland. I read more about them elsewhere, wrote about them in my column for Comics Buyer's Guide, etc.

And when one day, many years later, I heard that someone was putting together an anthology of science fiction and fantasy called Coney Island Wonder Stories, I knew immediately that I had to be involved. I wangled an invitation and wrote a story, "One Million Lightbulbs," about a Gilded Age robber baron who decides to cash in on the craze by building a fourth great amusement park on Coney Island. Not quite grasping why the other three are raking in money, he decides to emphasize spectacle, with one million lightbulbs...

I thought it was a damned good story, but it had one major drawback: It depended on the reader having at least a little familiarity with the history of Coney Island. I figured that wouldn't be a problem if it was in a book called Coney Island Wonder Stories. And it was accepted, so that didn't look like an issue.

But then the book didn't appear. For years.

Meanwhile, I'd done some thinking and had an inspiration. At the end of "Windwagon Smith and the Martians," I'd said that how the narrator learned the tale he had just told was "another story." Well, I realized that I could combine that with elements of "One Million Lightbulbs" and write a sequel to both of them, tying them together. I had it all plotted out. The title would be "A Yankee Circus on Mars," which was the name of the opening show at the old New York Hippodrome in 1905.

But writing a sequel to a story that wasn't published yet seemed a bit silly, and "One Million Lightbulbs" wasn't out. So I never wrote "A Yankee Circus on Mars."

Finally, in 2002, I was assembling a short story collection for FoxAcre Press, to be called Celestial Debris, and the publisher asked if I had any unpublished stories I'd like to include, to give readers something they hadn't seen before. So I told him the sad story of "One Million Lightbulbs," and he happily included it in the book. It was finally in print! Yay!

And three years later, in 2005, Coney Island Wonder Stories, edited by Robert J. Howe and John Ordover, was finally published by Wildside Press. (John Ordover had not been involved originally; he was added in hopes he'd actually get the thing into print.)

So the story is out there, drawing no attention. I could now go ahead and write "A Yankee Circus on Mars" -- but it sort of feels as if the moment has passed.