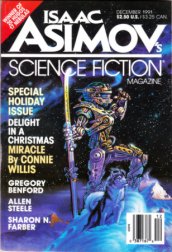 In the late '80s I'd been reading and writing a lot of alternate-world stories, and it occurred to me that virtually all of them, even ones set well into the future, were set entirely on Earth. There wasn't really any reason for that, so far as I could see -- I mean, why couldn't you have both crosstime travel and interstellar travel? They might even be related -- what if your hyperdrive could work either way? You could explore alternate versions of alien worlds...

It would make for a very complicated background, of course, which was probably the real reason authors didn't tackle it, but was there a good in-story reason?

I had read Isaac's Asimov's The End of Eternity

as a kid, and much as I admired Dr. Asimov, I thought it was dumb. The way time travel was presented in that novel made no sense to me. But one aspect of it did make at least some sort of sense -- once you had one system of exploration to exploit, you might not get around to developing others. I thought that was stupid with time travel, but crosstime travel might indeed compete with space travel. And if they were corporate enterprises -- well, there was a story idea there.

At the time I was very active on the old GEnie network, and I had heard about a stunt Harlan Ellison had done, where he wrote a story sitting in a bookstore window. I decided to try the online equivalent, and wrote New Worlds little by little on GEnie, a few paragraphs at a time until the whole thing was done. (This was not so very different from how I later wrote The Spriggan Mirror and its successor serials.)

It would have been embarrassing if the story didn't sell after that public genesis, but in fact it sold the first place I sent it, the top market in the field at the time, Isaac Asimov's Science Fiction Magazine, where it appeared in the December 1991 issue.

It was also included, like most of my alternate-world stories, in my collection Crosstime Traffic.

And a quick note for the curious: Back before Google made looking these things up ridiculously easy, I used to get asked why I named my starship the Arthur H. Rostron. Captain Rostron is one of my personal heroes; I almost always name my starships after my personal heroes. I sometimes wish I wrote more stories with starships in them, so I had more chances to bring attention to people like Lenny Skutnik and Charlotte Smith. (I did name ships after both of them; the Skutnik story sold but never saw print, and I haven't finished the Smith story yet.)