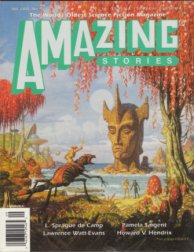 I'm actually a little embarrassed to admit how this story happened.

I got into a discussion with some other writers about what various editors were looking for in their stories, and the subject of Kim Mohan, then the fairly new editor of Amazing, came up. A couple of people said they just couldn't figure out what he wanted. Some editors focused on style, or on mood, or on character, or on certain themes, but they couldn't pin Mohan down.

I had already sold him two stories, "The Ghost Taker" and "The Drifter," so I felt I had a handle on his tastes, and said that he wasn't so hard; he liked stories that found new twists on traditional science fictional situations, but that felt obvious in retrospect. (It wasn't actually that simple, but the specifics were hard to explain and are no longer relevant.) I offered to demonstrate.

"Natural Selection" was my demonstration. It's got a contrived set-up and not much in the way of character development, but the plot was specifically designed to fit Kim Mohan's taste; if he hadn't bought it I don't have any idea where else I could have sold it.

But he did buy it, and it was published in the January 1992 issue of Amazing.