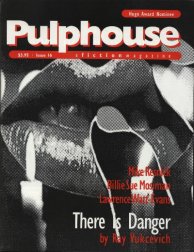 Science fiction as we know it today came from the pulp magazines of the twentieth century. Pulps were not sophisticated entertainment, to put it mildly, and to sell magazines the publishers put lurid covers on them that often had little or nothing to do with the contents. It was a clichť that science fiction pulp covers had lots of scantily-clad girls and bug-eyed monsters on them even when the stories inside were completely lacking in female characters or monsters of any sort.

SF fans used to mock such covers. Me, I always thought it would be fun to read a story where there really was a monster carrying off a screaming girl, and it made sense.

So I wrote one.

None of the actual surviving pulp magazines wanted it, but Pulphouse bought it, and it appeared in #16. I reprinted it in my collection Crosstime Traffic, too.