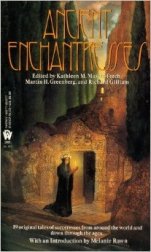 , and invited me to submit a story.

I didn't find the anthology guidelines as clear as they might have been; they called for stories in historical settings, not pure fantasy, but it also seemed (this was the unclear part) as if she maybe wanted historical characters.

I'm not a historian, and didn't want to try to get any ancient celebrities right, but as it happens, one of my sisters had just recently brought to my attention the story of our seven- or eight-times-great-grandmother, one Mehetable Goodwin, who was kidnapped by the Abenaki Indians in the 1690s and held prisoner for five years by the French.

Well, that was a real woman, around the time of the Salem witch trials, about whom I knew as much as almost anyone, who had survived some real adventures. So I took what I knew of her and turned it into a fantasy story, which Kathleen bought and published.

My sister later turned up more about our ancestor, and I learned that I had gotten a lot of stuff wrong, starting with the spelling of her name -- I'd assumed it was "Mehitabel," the spelling I was more familiar with, but she consistently (and any consistency in that era is surprising) spelled it "Mehetable." She wasn't taken to Acadia, but to Quebec, where she was involuntarily married to a Frenchman. After the war her original English husband came looking for her and bought her back. Which contradicts the story I'd written.

Ah, well. The historical Mehetable was not my heroine Mehitabel. But they both lived in what's now York County, Maine, and were both captured by Abenaki allied with the French, and some of the other details match up, and I'm grateful to my distant ancestor for inspiring my story.

And I'm pleased she survived her ordeal and lived a long and apparently happy life back in Maine, because I'm descended from a son she bore after all her adventures.