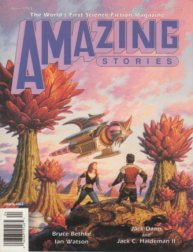 In the early 1990s it came to my attention that the Land of Oz was in the public domain, and the idea of writing an Oz story had a certain appeal. It also occurred to me (as it obviously did to many writers) that perhaps we shouldn't take L. Frank Baum's word as to who were the good guys and who were the bad guys.

While I was mulling this over, unsure what to do with it, I attended a party at Brenda Clough's place. (Brenda and my wife had been college classmates.) I mentioned to Brenda my notion that maybe Glinda had been a little more active behind the scenes than Mr. Baum let on.

Brenda immediately leaped on this, saying she had had similar suspicions for years, and by the time we went home that night we had agreed to collaborate on a story based on this premise.

Not long after I received a letter from Her Magnificence, Glinda "the Good." As her faithful servant Polamore Skaldeen, I promptly replied.

The correspondence continued; poor Skaldeen perished in the line of duty, to be replaced first by his more self-assured associate Chalkins Meelit, and finally by the crafty Weecon Bodge. Which is to say, those letters were really written as letters; Brenda wrote Glinda's, and I wrote everyone else's. The parts of the story that aren't letters (headlines, proclamations, and so on) we hashed out together, though I think the Scarecrow's proclamation was pretty much all mine. We had not plotted the story out in advance beyond the ending and the obvious fact that we were following the plot of The Wonderful Wizard of Oz; we made it up as went along.

The stuff about the flying monkeys was pretty much entirely Brenda's idea, and I had reservations about it, to be honest, but what the heck.

Our working title was "Operation Dorothy," but it was decided it should have "Oz" in the title, so we changed it, and then we sold it to Amazing.