In the late 1980s shared-world anthologies were a trendy thing in SF/fantasy -- Thieves' World, Liavek, Wild Cards, Medea, etc. Marty Greenberg suggested to his friend Isaac Asimov that maybe he should get in on this particular fad, and Dr. Asimov gave it a shot, creating "Isaac's Universe," a far-future setting where other writers could set stories. 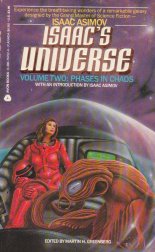 Asimov himself never wrote any stories for it, but several very respected writers did -- Robert Silverberg, Harry Turtledove, Hal Clement, etc. (Silverberg actually may have done more to get the project off the ground than Asimov did; Asimov came up with the basics, but it was Silverberg who worked out a lot of the details and wrote the first story.

I wasn't part of the initial group, but when the first volume did well enough to inspire sequels, I was one of the second bunch of writers Marty invited in. I looked at what Asimov and Silverberg had done, and noticed that they hadn't done much of anything about religion. Okay, maybe none of the alien species had any religions, and maybe most of humanity was resolutely secular, which would be in accord with Asimov's own beliefs, but there would still be religious groups, and some of them would want to send missionaries out to the other intelligent species. How would those other species (the premise had six spacefaring cultures -- humans and five others) react to these strange ideas?

In particular, the Naxians can "read" emotions; how would they cope with religious fervor?

So I wrote a story about that, entitled "Keep the Faith," and Marty bought it for Isaac's Universe, Vol. 2: Phases in Chaos

I think it's a pretty good story, so I included it in my short story collection, Celestial Debris.

I had a story in the third volume, Unnatural Diplomacy

, as well -- "One Man's Meat." Which is also in Celestial Debris. There was no fourth anthology, though there were a couple of spin-off novels (not by me).