Once upon a time, I became obsessed with Robert Plant's song "Big Log."

I had it stuck in my head for weeks, and the imagery kept popping up at inconvenient times. Eventually I came up with the notion that maybe if I based a short story on it I could get it out of my head. 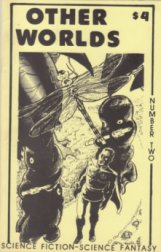 So I wrote "In League with the Freeway," which takes the song's lyrics -- well, the first verse, anyway -- and twists them into something completely different.

Alas, it wasn't a terribly good story, but it did break the song's spell over me. Having written it, I figured I ought to try to sell it; I worked my way down through all the major markets, and finally sold it to a revival of Worlds of If. Which went bust before they published it, and they gave me back the rights.

So I sold it again, to Gary Lovisi's semiprozine Other Worlds, where it ran in the second issue (of six), dated December 1988.

It's never been reprinted. Since it's a Cold War story, that's maybe just as well.