I'd sold a story, "The Worst Part," to the anthology Phobias: Stories of Your Deepest Fears

. That book did pretty well, so the editors decided to do it again, with a book that was announced as Phobias 2, but which was actually published as More Phobias 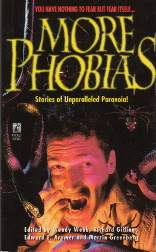 They invited most (maybe all, I don't know) of the authors from the first book to give it another go, and I did, with "Impostor Syndrome."

If you aren't familiar with the term, "impostor syndrome" is a common problem for writers and other creative people -- it's the irrational belief (maybe conscious, maybe not) that any success one may have had is a fluke, an accident, and at any moment your audience may realize you're a fake, an impostor, not actually a writer/artist/performer/whatever at all, and cast you into the outer darkness, to be ridiculed and left to starve.

If you aren't a writer or artist, you probably don't realize how very, very common this is. As in, almost universal among people who are actually good at what they do. (It's generally incompetents who are sure of their own brilliance.) The trick is to ignore it and write anyway.

Some people can't overcome it. Sometimes they have friends who try to help them. Sometimes this is a bad idea.

And that's where my story came from.

Besides its appearance in More Phobias

, I also included it in my collection Hazmat & Other Toxic Stories.

[Note: This is one of only a handful of stories I've written with no fantasy or science-fictional elements.]