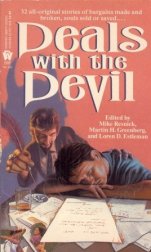 I think every beginning writer writes at least one deal-with-the-devil story; in fact, the difficulty of selling them is a cliche because everybody tries it, and most of them are either lousy, or too much like a classic written decades earlier.

I was no exception. I know I wrote at least three, none of which sold, back in the 1970s. In a staggering bout of lack of imagination, two of them were entitled "Raising Hell." The third one was "For Value Received."

It didn't sell. It didn't deserve to.

But then in 1993 Mike Resnick invited me to contribute a story to an anthology with the straightforward title Deals with the Devil, so I hauled out my three old stories and looked them over.

Neither "Raising Hell" looked worth saving, but "For Value Received" wasn't as bad, so I rewrote it stem to stern, sent it to Mike, and he bought it.

Alas, the anthology, which was a fun little book, appears to be long out of print and pretty much unavailable.

I did include "For Value Received" in my collection, Hazmat & Other Toxic Stories.