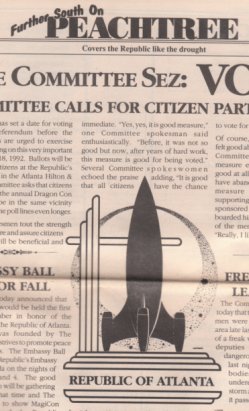 Okay, now this story is obscure, and incomprehensible to anyone who doesn't attend science fiction conventions.

Every year, the World Science Fiction Society, "an unincorporated literary society," holds the World Science Fiction Convention. Worldcon, as it's called, is run by unpaid volunteers -- a different bunch each year. Fan groups in various cities bid for the right to hold it in their town, and who gets to do it is determined by a vote of the membership at the Worldcon two or three years (the interval has changed a few times) before the planned event.

Some years there's only one bid. Other years there are several, and the competition can get vigorous, with various bidders holding parties and distributing campaign literature.

For 1995, a group in Atlanta was bidding; so was a group in Glasgow. As my grandfather was a graduate of the University of Edinburgh I could not possibly support anything run by Glaswegians, and besides, I had friends working for the Atlanta in '95 bid, so when someone from the Atlanta in '95 committee asked me if I could write a story for their "bidzine," I agreed. "Corners in Time," a time-travel story about the bidding for the 2064 Worldcon and Atlanta's history, was the result. The bidzine, Further South on Peachtree, was published in July 1992.

Atlanta in '95 lost; the 1995 Worldcon, named Intersection, was held in Glasgow.

The story itself is a silly little short with several in-jokes in it -- all the characters, for example, were obviously named (by their parents; the surnames are random) after various SF and fantasy authors.

The title comes from the Jefferson Starship song "Hyperdrive" -- "I never thought there were corners in time/'Til I was told to stand in one..."

And since this explanation is now almost as long as the story, I think I've said quite enough.