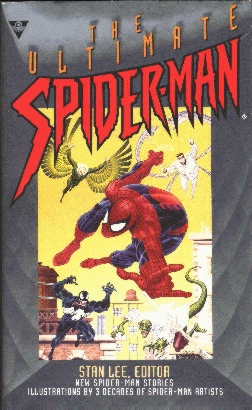 So I was invited to write a Spider-Man story -- Byron Preiss had made a deal with Marvel to package a Spider-Man anthology, and if getting paid and getting to play with an iconic character weren't enough to attract me, there was a sort of additional bait dangled -- the writers who did the best job here would have a shot at writing novels for Marvel.

I thought that sounded pretty good. I'd been talking to people in the comics business about the essence of the character, and it all came back to Stan Lee's "With great power comes great responsibility." Power can be fun. Responsibility isn't. Spidey's life is never going to be all fun and games because of his ferocious sense of responsibility.

Add in the idea that Spidey would undoubtedly have kids who idolized him, and the whole question of whether celebrities are responsible for the actions of their fans, and there's the story.

It's never been reprinted, so far as I know -- Marvel owns the rights, obviously; I don't. It did get me a shot at writing Marvel novels, but that didn't work out all that well -- they wanted so many changes to my X-Men outline that I dropped out of the contract, and while I did get to co-write a Spidey novel with Kurt Busiek under my Nathan Archer pseudonym, Spider-Man: Goblin Moon

, it got caught up in a dispute between Marvel and the book publisher and got very limited distribution.

Ah, well. I got to write Spider-Man; lots of writers never had that chance.